Fens: ‘a low and marshy or frequently flooded area of land’

The fens cover a large tract of land in Cambridgeshire, Lincolnshire and Norfolk, and despite the definition above, only certain carefully restricted areas flood with any regularity. We have drained the water from them to the point where the peaty soil has contracted and sunk below sea level in many parts. Every dry Summer some of the soil simply blows away in a discrete English approximation of a sandstorm.

The land reclaimed is been some of the most fertile in the whole Island of Britain, ‘Grade 1’ in fact, supporting the most intensive forms of agriculture. 37% of England’s total production of vegetables come from these soils. This is not a land of hedgerow or wood, rather one of industrial agriculture.

Yet this man made landscape is not one vast uniform plain of peat, there are, and always have been intrusions of clay that rise up as islands in what was once a landscape of marshland. Ely is properly called ‘The Isle of Ely’, and it’s cathedral ‘the ship of the fens’. The village I live in is set on a rise of clay that tops out at a staggering twenty metres above sea level. Living in what most people regard as a flat and boring place alters your perception of what qualifies as ‘flat’. As you drive or walk around these subtle ridges and folds of higher ground reveal themselves, you start to read the landscape in a different way. Despite it’s fields being bereft of much in the way of hedge or tree, there are some hedges clinging to the lanes and droves and a surprising variety of wildlife survives and even thrives.

There is one shining of example of fenland conservation in the shape of Wicken Fen, a National Trust reserve that shows what the fens were like (to some degree).

However it’s the islands of clay, and specifically the one that I live on that fascinate me. Where once they would have been a refuge of solid ground amongst the waterways and marshes, today they look out over a sea of fields that have been drained by the network of ditches, lodes, cuts and drains. Look at an ordnance survey map of the area and the land is covered by a blue spiders web.

As soon as we moved to the village I walked some of the droves around the village, routes that were originally laid out to facilitate access to the newly reclaimed agricultural land in the 16th and 17th centuries. Some of them became tarmac roads, many are left as muddy trackways between fields. This explains the insanely annoying fenland roads that chicane around fields. Long straights dotted with tight right angle or dog leg bends that seem designed to catapult your car into the adjacent field or river. Round here the fields were more important, so the roads had to fit around them. 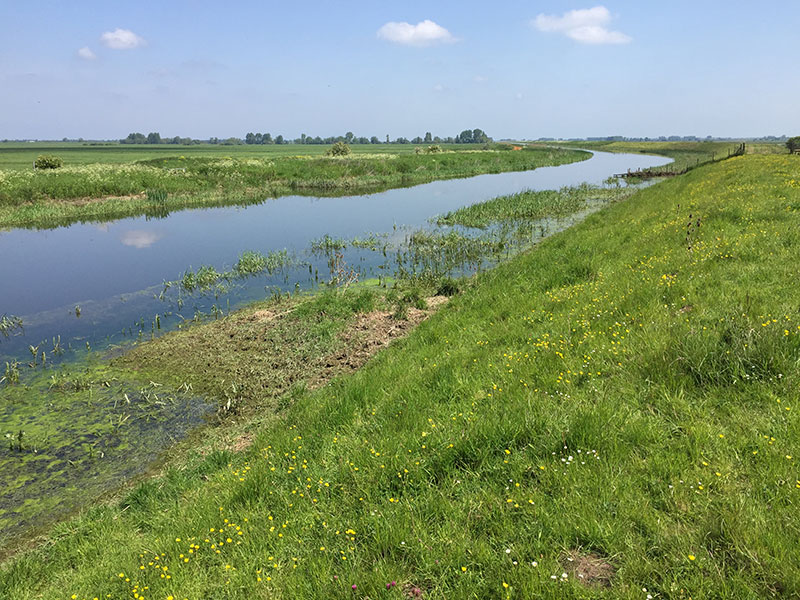 Within a mile of my house the ‘New Bedford River‘ carries the water drained from the fens up to Kings Lynn and out into the North Sea. More prosaically this is also called the ‘Hundred Foot Drain’, after the distance between the tops of the two embankments on either side of the river. This artificial river is of course dead straight, designed by engineers in the 1600’s and built often by prisoners of the various wars we seemed to enjoy getting embroiled in. In fact the construction of the drain was interrupted by the Civil War. 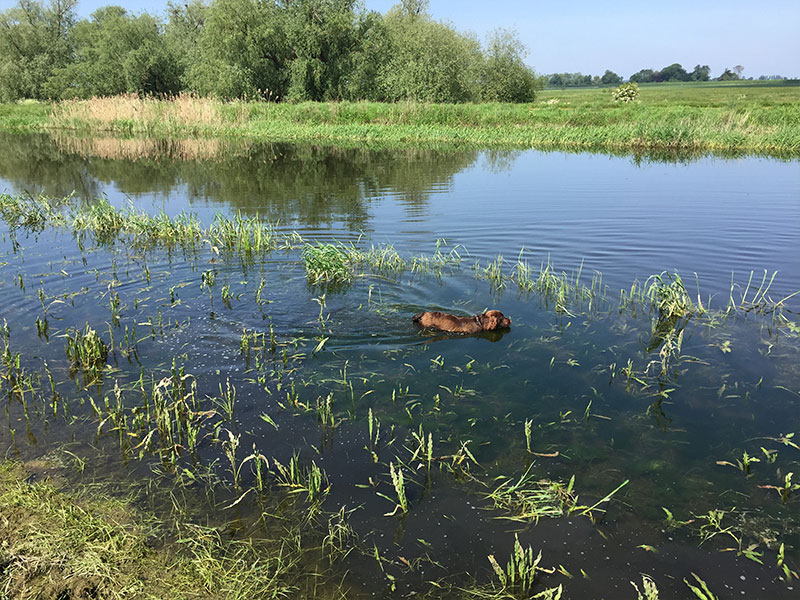 The dog doesn’t give a toss about that however, it’s just somewhere to cool off.